Olphaert den Otter (Poortugaal, 1955) works with egg tempera, often in large series. From time to time, he creates pastel murals on location as a ‘work in progress’, which he continues to work on throughout the entire exhibition period. A process that is recorded on DVD as an animation. Besides his work as a visual artist, he is a countertenor in Het Retorisch Kwartet and lectures on themes related to the philosophy of culture.

Olphaert den Otter studied at the Willem de Kooning Academy in Rotterdam. His work has been included in several collections, including those of the Boijmans Van Beuningen Museum, Centraal Museum Utrecht, Stedelijk Museum Amsterdam and the Haags Gemeentemuseum.

The music society was called Dockyard. The football club was named after the wharf. The houses built between 1914 and 1918 were owned by the company. Beyond the garden stretched the containers, warehouses, wharfs and factory pipes of the Rotterdamsche Droogdok Maatschappij. Those who, like Olphaert den Otter (1955), grew up in Tuindorp Heijplaat, smelt, heard, tasted and felt the harbour closely surrounding them.

Den Otter is an ‘environmental pessimist,’ as he calls it. Heijplaat was an industrial estate for living and working, where the usual environmental laws for particulate matter, odour and noise pollution were structurally not in effect. ‘In terms of the environment,’ the artist states decidedly, ‘everything that could go wrong there, went wrong.’

Den Otter has, since his graduation from the art academy in Rotterdam in 1981, been an artist, not an activist — although it is thanks to his political pressure that the World Museum in Rotterdam was recently rescued from its downfall. Paper, panel and egg tempera are the means by which Den Otter expresses himself. And he has done so for years, in an extraordinary, conscientious manner. Den Otter works in series. His style is best described as neo-realistic. He works with egg tempera, the medium great Renaissance masters such as Botticelli and Mantegna also painted with. All of Den Otter’s work indirectly refers to the effect human beings have on earth. Indirectly, for humans themselves are never depicted by Den Otter.

In the series World Stress Painting (from 2009 onwards) he explores the consequences of great catastrophes on land, at sea and in the air. The fact that these catastrophes were caused by human intervention is suggested, but never asserted. In his series Stal- en Kluismorfologie (127 paintings, created between 2004 and 2007) he quotes old and young masters, yet the crucial motive is removed; Descents from the Cross, Adorations, the Birth of Christ. What remains is a series of surrealistic looking, ‘vented’ landscapes that breathe destruction and existential confusion.

In the Noletloodsen, Den Otter presents three new works on panel and canvas. The first two, Care and Cure, have been put up in such a way that the viewer can never see both works at the same time. Care and Cure are to be approached via a labyrinth-esque pavilion.  This is done on purpose, because Den Otter wants the paintings of two ‘tents’ surrounded by attributes, to express two ways of life. Those ways are diametrically opposed — or are they? The mirrored construction makes one realise: the one cannot exist without the other.

For Care and Cure, Den Otter has been inspired by the Dutch carravaggist, Johannes Moreelse, who, at the start of the seventeenth century, painted Greek philosophers Heraclitus and Democritus several times. Democritus as the laughing philosopher, Heraclitus as the begging, praying philosopher on the edge of despair. According to Den Otter, the two philosophers symbolise the vita activa — personified in the philosopher who encounters the world with open arms — and the vita contemplativa — expressed through the philosopher who retreats from the world in contemplation. According to Den Otter, these two attitudes in those old paintings form a point of departure for the present.

Cure depicts an apocalyptic landscape, which fire and battles appear to have raged across. The little tent in Cure is a pile of weapons and harnesses — pull out one weapon, and the entire thing collapses. In the foreground lies — mysteriously — a glowing globe. Care is gentler: A little ‘hut’ made from birch stems and canvas, on a bed of moss, is perhaps concealing the painter. His painting hat frivolously decorates a tent-pole. A perky little flag sticks out from the canvas. Here too, a globe lies in the foreground. The living creatures that dwell in these huts remain out of sight — but the world is lurking.

In these double paintings, Den Otter attempts to address a current dilemma. Do you enter into battle — risking a mere increase of the misery (look at IS) — or do you retreat into the safety of your shell and — cowardly — abstain?

Den Otter offers some perspective with his third painting Tondo Mondo. On top of his pavilion stands a telescope. Focus the telescope and seventy-two metres further along the warehouse looms a glistening painted globe. It is an earth globe that guides the eye toward the East, the rising economies of India and China. There, clouds and brown trails of smoke circle over millions of light sources. The colours are thrilling and fade from pale to the deepest of ocean blues. Layer by layer, you peel away the atmosphere that envelops the earth — the planet so terribly afflicted by man. There, the remnant of a hurricane swirls across the sea, further to the left, everything brightens, as though thousands of suns are rising simultaneously. Far too breathtakingly beautiful to destroy. 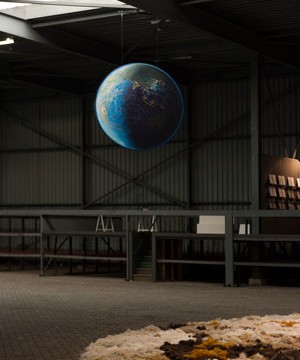