Until the year 2000, Bernadet ten Hove (Raalte, 1957) worked in an object-oriented fashion. Following this period, she began to focus her work around the human being or ‘the being of human’. This complex subject matter demanded an in-depth view, as well as an appropriate form. In the series ‘Present Presence’, existing portraits of historic figures, from a variety of painterly approaches, are reduced to their essence and translated into the here and now. In the series ‘Phonetic Sculptures’ (compositions of cast wall sculptures), language and sound form the points of departure.

Bernadet ten Hove trained at the AKI in Enschede. Her work has been displayed in, among other places, the Rijksmuseum Twenthe, De Ketelfactory Schiedam and Phoebus Rotterdam.

The sensation behind the clouds

She’s currently hanging in the small but fine Frick Collection in New York. Margaret Lemon, painted in 1638 by artist Anthony van Dijck. Van Dijck created several portraits of his model and lover, but this one in the Frick, in three-quarter profile, with red carnations in her hair, is the most magnificent. Margaret’s eyes are dark as ebony and slightly squinted in mistrust. Her mouth is determined, her nose too large to be truly beautiful. Not much is known about Margaret Lemon, other than her aggressive jealousy — at a certain point she even tried to bite her painting lover’s thumb off.

What does Margaret Lemon have in common with the portraits or ‘faces’ depicted by Dutch artist Bernadet ten Hove (1957), six of which are hanging in the Noletloodsen in large format? In principle, nothing. The portraits painted by Ten Hove are not about Margaret Lemon, though they are based on historical figures — I recognise artist William Turner, the austere Aletta Adriaensdochter, once painted by Rembrandt. What binds Margaret Lemon to the people portrayed by Bernadet ten Hove, is their ‘DNA capacity in the present’, as the artist calls it. By that DNA capacity, Ten Hove means the power possessed by the historical figure to transform into a contemporary face. Margaret Lemon, is all I’m saying, might as far as I’m concerned be the next face Ten Hove examines.

The artist, trained at the AKI in Enschede, displays six faces in a white painted construction which, with a little imagination, looks like an unfolded diamond. Those six faces are a continuation of a series of twenty-two historical figures (Present Presence) which she has been working on since 2008. Additionally, Ten Hove presents four misty white, three-dimensional little sculptures of plaster-like material, cast in a wafer-thin aluminium mould. The sculptures are ‘phonets’ — a term thought up by Ten Hove herself, and an amalgamation of the words phonetic, photons and comets. Where in previous work the ‘phonets’ referred to words, the new quartet in the Noletloodsen refers to numbers. Each phonet moves in three motions around two pairs of numbers: 00, 22, 33 and 44. But all you see is the space between the numbers. That which is invisible becomes visible.

In her ‘faces’ — at first glance so far removed from the abstract ‘phonets’ — Ten Hove does something similar. In the ‘faces’, too, the enormous gap between then and now is bared as well as bridged. It evokes a feeling once described by Ten Hove, in an interview with Trouw newspaper, as ‘the expanse’. ‘Emotions are like a deck of clouds. One day it’s grey, the next it rains, and the following is radiantly sunny. Emotions come and go. We ought to relate to it as to the weather. Obscured behind the deck of clouds lies a gigantic expanse. Our business is to get to know the expanse.’

This ‘getting to know’ is a business of trial and error, failure and success. It is a process of seeking, of reflection, creating, testing and starting again, until something emerges of which she thinks: yes, now it’s starting to look like something.

The ‘faces’ are built up of three components. There is a strikingly shiny and neutral band, which serves as a pillar for the glue combed, near abstract ornamental line of colour above it. Associations with clothing impose themselves in this middle layer, but it may as easily represent an abstract landscape of rises and falls. Over this landscape, the ‘faces’ rear: intentionally left very pale. This makes them appear to dissolve into the white background, as well as loom from it. The only harsh colour in the ‘faces’ is formed by black velvet, stuck into the face like eyes. It gives the figures — woman or man, young and old — an inescapable, piercing look.

With her ‘faces’, Ten Hove wishes to avoid that which is customary in portraiture. ‘There is so much self-evidence in the creation of those — in terms of composition, in terms of imitation.’ It is the latter, which Ten Hove — autonomous artist to the marrow — is allergic to. She aspires nothing less than the creation of a new perception of the portrait, a perception which connects present to past and which touches upon what it means to be human — and beyond that, an artist. How does one develop a mind that is as independent as possible? How does one escape the constraints of social expectation? How does one continue to claim the autonomy of your work? Allow the mind to expand — perhaps that answer will suffice, for now. 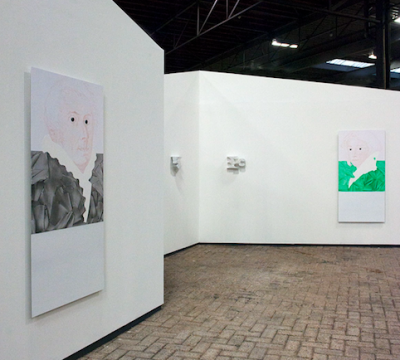